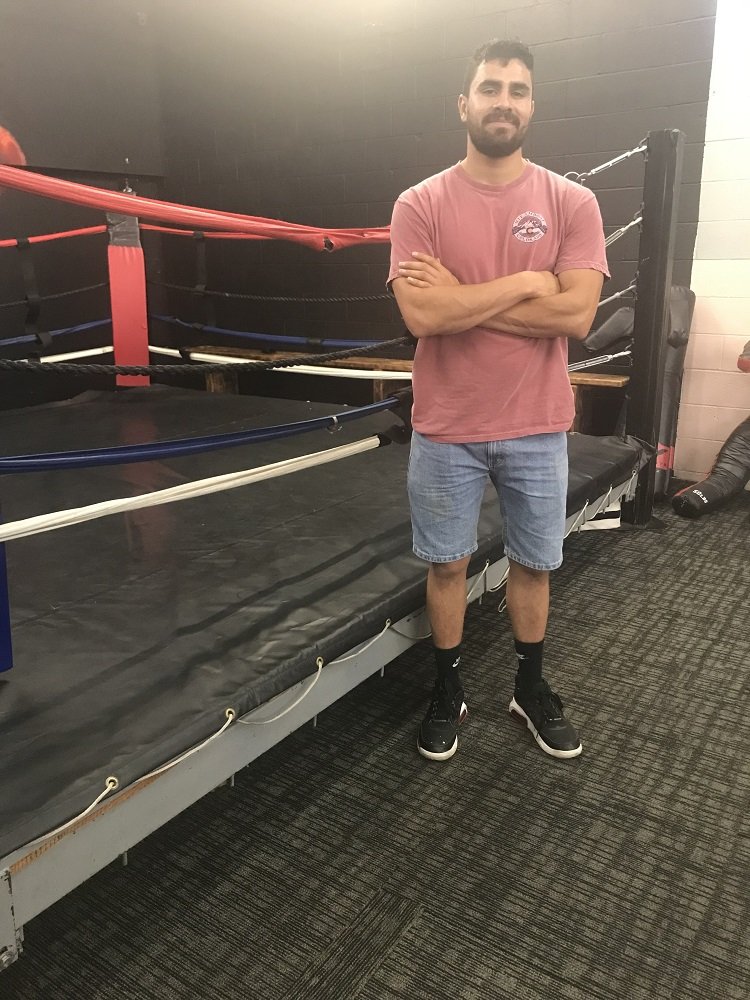 Jaime Velazquez, owner of ‘jrssoma,’ creatively designed his boxing and fitness gym with a boxing ring and local murals on the adjacent walls.

It’s almost time for the one-year anniversary of “jrssoma,” an up-and-coming boxing and fitness gym opened by Jaime Velazquez at 1473 Broadway in downtown Atwater in December 2020.  Considering the popularity of the gym, it’s certain there will be a great celebration.

Gym members also had a good time at jrssoma on the evening of October 9 when the business held a barbecue for guests to watch the heavyweight title boxing match between undefeated WBC world champion Tyson Fury and former long-time heavyweight champion Deontay Wilder.

Velazquez told the Times, “It was a big one in boxing, and a lot of people who follow the boxing world were interested in it.  We had a lot of people come out, and it’s a good thing the gym is easy to get to off the freeway and there is a lot of parking available.”

The name of the gym is actually Jr.’s SOMA, and it stands for Junior’s School of Martial Arts.

“I was born and raised in Atwater.  I moved away to go to college when I was 17, and when I was living in San Francisco, I started boxing.  I finished my degree and moved back to Atwater at the beginning of 2020.  I decided I wanted to open a boxing gym like the one I was working at in San Francisco and have a focus on youth.  I wanted to give back to the community with everything I have learned living away from Atwater, and help some of the kids here out because there are not a lot of resources in Atwater.  I feel like providing fitness-related things and encouraging kids to follow their dreams and get an education.”

The gym opened on December 7, 2020 as a boxing gym that offers strength and fitness classes, as well as Jiu-jitsu.

Velazquez exclaimed, “Jiu-jitsu is very popular, and we’re the only gym in Atwater that teaches it!

“However, the focus of the gym is boxing and our youth program.  The youth program is the staple of the gym.  We have two age groups – – ages 5 to 8 and ages 9 to 14.  With both classes combined, we have roughly 50 to 60 youth members.

“The classes are held Monday through Thursday, and we spar them on Thursday.  That may be the students’ favorite night!  That’s where they get to practice boxing inside the ring with an opponent.

“Parents are welcome to either sit in on the classes or drop the kids off.  I chose to make parents feel comfortable sitting in on their kids’ practice and to charge them an affordable price.  The cost is $69 per month for four days a week, Monday through Thursday.

“When I was building this gym, I made it month-to-month, non-contractual, since I wanted to have a low barrier for entry to have kids and parents feel comfortable joining.  A lot of times when I was growing up, my own parents wouldn’t sign me up to a boxing gym because of high prices or having to sign a contract.  However, I’m going to be charging an initiation fee soon to encourage the kids to stay in the program.”

Describing the type of Jiu-jitsu practiced at jrssoma, Velazquez told the Times, “Jiu-jitsu is a form of wrestling with a gi, which is the robe-looking garment, and you use it to your advantage.  A lot of the moves require you to grab the lapel and part of the pants to do them.

“Jiu-jitsu comes from Japan and was then taken to Brazil, and the Brazilian form is what we practice at the gym.  It is really popular nowadays and we offer it two times a week, and they focus on submissions, which are moves like an arm bar.

“The discipline has a belt ranking system.  To be a blue belt, it takes a year of going to class every day.  A blue belt understands the basics and has practiced it enough for their trainer or teacher to give them a blue belt which is kind of like a pass on mastering certain moves and being able to defend themselves properly.

“Everybody starts with a white belt, then blue, purple, brown and black.  You go from one level to the next by mastering certain moves, and then you need to be able to teach.  It typically takes 10 years to become a black belt, and sometimes even longer.

“Every fight always ends up on the floor.  Jiu-jitsu was created for the smaller man to gain an advantage on the floor through certain moves.  It is different from karate because there are actual competitions where you go against other Jiu-jitsu practitioners, and you want to be aggressive trying to submit the other person.  You are naturally going to learn how to defend yourself.

“We have adult boxing and fitness classes, in addition to youth classes.  A lot of times, parents join after signing up their kids.  Some join just for the cardio portion, and some members have lost 20 to 30 lbs. in two months.  I like to see that because you can see their progress over the span of two or three months and see how their mood, physique and confidence improves.

“I would say 40% of the adult classes consist of women.  A lot of women take boxing, strength and fitness courses.  It’s not an intimidating gym for women to join.  The women help each other, and they form a community.

“The gym itself is coming along.  I’m being creative in the way I’m designing and building it out.  I had a UC Merced Art professor do a mural on one wall, and another local artist do a mural on another wall.  Having artwork in the gym is my way of working together with local artists.  The pieces are one-of-a-kind and they stand out.”

Describing his first year in business, Velazquez told the Times, “We were opening just before the height of the pandemic.  It actually went really well at first. We had 40 kids signed up to our youth program in the first month because parents were wanting to get their kids to socialize and have a physical activity.

“We required masks, but made it optional in June 2021.  We did a good job keeping the gym clean, and doing drills that didn’t require us to be so close to each other.”

Describing the way he has chosen to give back to the community, Velazquez said, “On the weekends, we sometimes host free hip-hop classes and yoga classes, and I’m considering hosting a nutrition seminar.

“In the Atwater Fourth of July Parade, the business entered a trailer with kids, and we won Best Business Float.  Some of the members helped me build it.  We had two heavy bags hanging in the middle of the float, and about 30 kids were punching the bags and tossing candies.

“In the future, I’d like to host more community-inspired events like the hip-hop class, yoga class, nutrition seminar and maybe a vendor fare where vendors sell their merchandise at the gym.

“I’ve noticed that a lot of the parents help me out with ideas and ways of sponsoring the gym, and when I host something on the weekend, they bring snacks for the kids.  I really like the sense of community.  A lot of parents give rides to other kids, and they didn’t know the families before.  Now, a lot of the parents are friends with the other parents.”

He said, laughing, “They don’t want to leave the gym because they have friends there now.”